Eileen Gardner, one of our long-term supporters, recently had the chance to meet up with a student her family had sponsored at Kisima.  Here she writes about the experience: 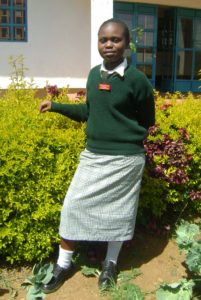 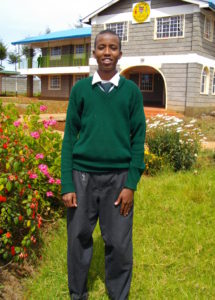 We had always enjoyed receiving letters from our two sponsored students at Kisima, Simon Letapo Lodung’u and Pauline Muthoni Maina. It was fascinating to hear about their different backgrounds and to have a glimpse of how they were growing emotionally, spiritually and intellectually. Both were bright students who worked hard and never ceased to be grateful for the opportunity they’d been given at Kisima. Eventually the time came for them to leave the Kisima nest. Pauline was awarded a scholarship at Kenyatta University in Nairobi and will soon be graduating and pursuing a career as an English teacher. It had been obvious that Simon would focus on science or engineering, but we were astonished to hear that he had been awarded a scholarship to study engineering in China. How was that possible?! 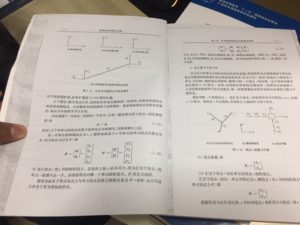 A textbook in Chinese

As a family we had lived in Hong Kong for several years, so we knew exactly how hard the Mandarin language is. Instead of an alphabet of 26 letters as we have in English, each word is represented by a character, a series of short strokes which must be written in a particular order. So learning Chinese involves learning thousands of characters, each one unique. Not only that, but there are five tones in Mandarin, and if a word is spoken with the wrong tone, it will either not make sense or mean something else entirely. How would it be possible, without many years of study, to learn Mandarin to the level where you could even begin to undertake a degree course in engineering?

In June this year, we found out. My daughter has been learning Chinese since she lived in Hong Kong as a toddler, so this summer we decided it was time to visit China and give her a chance to practise her Mandarin conversation skills. Would it be possible to link up with our long lost student, Simon? We’d had no contact with him for five years or more.

Catherine Maina, Kisima’s sponsorship coordinator, tracked him down and we first saw each other on a crowded subway platform in the centre of Beijing. Of course he is now 25, a young man, very different from the photo we still have on our windowsill of him and Pauline in their school uniforms, soon after arriving at Kisima. Simon was shocked to see Rachel, my daughter, whom he remembered as a six or seven year old – she is now a lot taller than me! 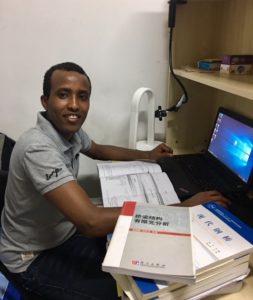 Simon at his desk in his room 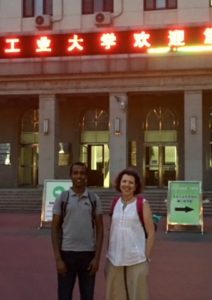 Simon and Eileen outside the Beijing University of Technology

Simon is in his third year at Beijing University of Technology, studying civil engineering. He lives in the university accommodation for foreign students, and shares a room with a young Vietnamese man. We spent time with him looking around the university, and there he told us his story. He spent one year studying Mandarin in a distant Chinese city with other foreign students, on an extremely intensive course. They covered in that one year what students of Mandarin would normally cover in five to ten. Constantly told that the scholarship depended on their being able to master the language, and being threatened with the prospect of being sent back to their home countries, the students became fiercely competitive. Day after day, Simon would rise at 3am to study, and there were no holidays during the entire year. At the same time he was dealing with culture shock and homesickness for his family, Kisima and Kenya. His efforts paid off. He did extremely well and was awarded a place to study civil engineering at the prestigious Beijing University of Technology.

The course is far from easy and there is resentment from some Chinese students that places are taken up by foreign students. More than that, the Chinese have very little understanding about, or experience of, Africa and Africans which means that Simon and his compatriots frequently face a lack of respect and understanding. Happily, Simon has met other students from Africa, from Kenya, and even one from his own tribe, the Rendille! He also socialises freely with the other foreign students. 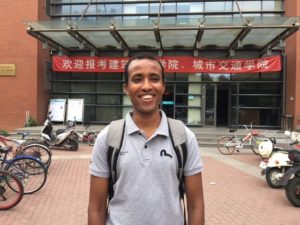 Simon outside the department of Civil Engineering 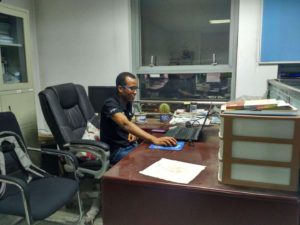 Simon in the engineering department

He is now in his third year and has so far achieved very good grades. Indeed, he was one of only two foreign students whose Chinese was deemed of a high enough standard to be eligible to specialise in highways engineering, which is significantly more demanding. When his studies are over, he plans to return to northern Kenya to help with infrastructure projects there. Interestingly, when I asked whether his fellow Rendille in Beijing had the same intention, he replied that he didn’t, because he hadn’t been to Kisima and so didn’t see the world in the same way. Simon explained that Kisima had taught him so many things beyond the academics, and had instilled in him the need to help one’s people and to use one’s education for the good of others.

Now 25, with his secondary school education far behind him, Simon is still fiercely loyal to Kisima and speaks of the staff with great fondness. He knows that had he not been sought out and offered a place there, he would still be living a nomadic lifestyle, scratching a living from an inhospitable land and frequently facing food insecurity. His mother and siblings are still very much in his heart and on his mind. He has provided phones for them and calls them to keep in touch, although his studies and his location, in another country altogether, are so far beyond their frame of reference that he cannot share much about his daily life with them. Now he is facing the dilemma of whether to accept a scholarship for a master’s degree or to return home to share with his two brothers the responsibility of looking after his mother. 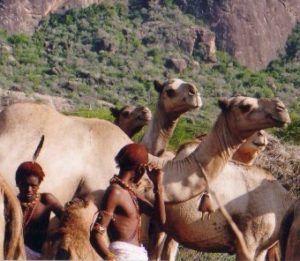 Simon’s brothers and the family’s camels 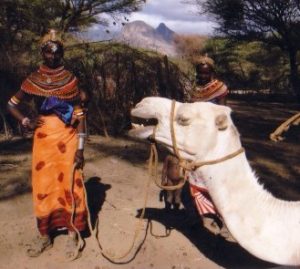 Simon’s sister preparing for a journey

For Rachel and me, meeting up with Simon was a highlight of our Beijing trip. We have since spent a lot of time pondering the journey he has taken from a remote tribe in northern Kenya to the overcrowded metropolis of Beijing. We’ve been inspired by his determination and his resilience and feel genuinely privileged that our lives have crossed. We can see so much potential in this mature and disciplined young man, and are excited to see how God might use him in future.